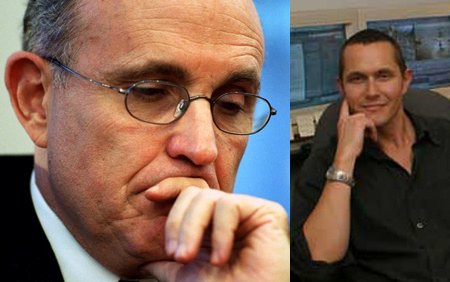 In early 2007, former New York City mayor Rudy Giuliani was leading in the polls for the Republican Party presidential primary, and he seemed sure to get the party’s nomination. It was at that time that I interviewed Williams Cole, the producer of Giuliani Time— a negative documentary about Giuliani. Cole and I talked about his craft, emerging technology, and the state of the race at that time. The interview, which took place in March 2007 over email, is reprinted below.

PARSA: How long did research for “Giuliani Time” take?

COLE: Research for the film was ongoing for many years and throughout the editing as well. Basically the film began in late 1998 when Michael Ratner (now president of the Center for Constitutional Rights) supported a film that was conceived to be about Giuliani and the First Amendment, since at the beginning of his second term Giuliani was acting out in an increasingly irrational way (the NY Magazine ad that he demanded be taken down because it made fun of him, trying to ban protests by taxi cab drivers, an administration-wide hostility to journalists’ requests for information, etc.) – myriad examples – dozens of which we researched and shot around – that, taken together, would indicate not only a personality that was hostile to criticism, no matter how constructive it might be, but who created an administration that was largely based on expressions of loyalty and an ‘us vs. them’ mentality and that ‘we’ are doing the right they and ‘they’ (the critics) are deluded at best. Looking back, it’s clear even before Bush was elected that Giuliani forged the kind of myopic, loyalty-based philosophy of governance that Bush is so so infamous for. But research in all areas – factual, archival, interviews – was extensive and widespread. We shot over 300 hours of footage and amassed probably the same in archival material. And the stacks of journals, newspapers, magazines, etc. were towering.

PARSA: “Giuliani Time” has been called a ‘muckraking’ documentary (by Wikipedia at least, although I think I’ve heard that said in other places as well). What do you think of this label?

COLE: In my mind “muckraking” is hardly pejorative- from Jacob Riis and Upton Sinclair to Jack Newfield and Wayne Barrett, the term of investigative journalism represents the best of what the profession can do – i.e. represent the underrepresented while trying to live up to the ever dwindling ideal of journalism as the Fourth Estate. So, while I don’t know if Giuliani Time can compare to some of the great earth-shattering pieces of muckraking journalism, I do feel that it accomplishes a rebalancing of how the policies that Giuliani touting in NYC were represented in the mainstream media. In most of the nation and the world it was “Giuliani saved NYC” by cutting crime and welfare without ever really going into what that meant or what the consequences might be to minorities and the poor. So, I think it’s an honorable tag to say the least.

COLE: I think that there is a big difference between what the average New Yorker knows of him and those that don’t live in New York know of him. Those that don’t live in NYC just know the bits and pieces of positive coverage (with an occasional piece about a protest) that the national press carried about the NY “turnaround” for many years. And, of course, after 9/11 it was America’s Mayor, etc. In NYC I think people know more about him but it’s really based on WHO you are – most minorities, and especially African Americans, really despise him and that’s been pretty consistent in my experience. If you talk to wealthy white liberals it gets less clear – most don’t like him but then again he did “clean things up” – if you go to the outer boroughs, to working class whites then he probably gets even more support. Of course, after 9/11, many people that criticizes him then embraced him but now that’s he’s running for President I think that most New Yorkers are like “what!?” and if he gets far or even the nomination I think it will be more of a surreal experience for New Yorkers than something that people will be proud of.

PARSA: “Giuliani Time” incorporates a whole heck of a lot of interviews with a really wide variety of people- figures in the NYC political scene, welfare recipients, reporters, and even nuns. Did you find New Yorkers were generally eager to talk about their former Mayor?

COLE: Yes. Mind you, this was all shot before 9/11 so it was in the trenches while Giuliani was in office. But I do think he’s a colorful person to comment on. But when it came to some critics and people in the administration it was another story. People were scared of his potential retribution and we lost many interviews at the last moment from people that knew him when he was in the Reagan administration and were genuinely scared to go on record commenting and criticizing him.

PARSA: Did you try to arrange an interview with Rudy himself?

COLE: Over a dozen times over a couple of years we asked to interview him. We even sent a letter to almost all of the Deputy Mayors and heads of various parts of city government (that were forwarded to the Mayor’s Press Office as was the policy then). We got blown off or excuses were made, etc. The fact is that he ran a tight ship and if he didn’t think you were going to be 100% positive then he wasn’t going to give you an interview. That said, I don’t think he would have said very much different to our questions than you see him in the voluminous archival footage we have of him at press conferences, etc.

PARSA: “Giuliani Time” wasn’t financed by any big movie studio, and therefore (correct me if I’m wrong), there wasn’t a whole lot of formal advertising that went into promoting it. I posted a clip from it online (probably illegally), and it’s now been viewed by more than 30,000 people in various formats across various websites. Not every one of them mentioned that it was from a documentary, but several of them did. What do you think about this type of decentralized free promotion and publicity that relies on people rather than advertising budgets?

COLE: I think it’s great on one level because it does allow for a free and widespread awareness of the film through the Internet. But I don’t have much doubt that if our distributor had the money to really publicize the film (with ads in major papers, TV, radio, etc. – NONE of which we had) that it would become the “must see” film right now. It’s hard when you put so much into a film and then when it comes to the release it seems buried or sort of off the radar. The economy of releasing films is difficult and always changing but it seems that fewer films are getting the real backing they need to really get off the ground. Though I do think the viral video element is wonderful and important but I also hope (and we’ll never know) that it sells more DVDs!

PARSA: We’ve recently seen that video– both short web videos and full documentaries– has the potential to do serious damage to politician’s campaigns (take for example the infamous “macaca” video which contributed to the failure of former Senator George Allen’s run for re-election last year). Do you think we’ll see more of this trend in the 2008 Presidential election?

COLE: Good question. I think it all depends how and if it gets into the news cycle. The damage is really done when it jumps from websites and blogs to the MSM (to use a right wing term for mainstream media). That’s when it’s played on the evening news over and over and everybody starts talking about it and it becomes glued to the politician. Our clip of Giuliani in drag and Trump was posted on youtube and written about some and now has over 150,000 views. That’s a lot and I’m sure that is having some effect (though, in my mind for the wrong reasons – the irony of all of this is that it probably won’t be his seriously flawed policies against the poor that bring him down but just the silly fact that he sometimes dresses up for whatever kind of joke). No doubt, though, politicians should and probably will be more careful anytime they speak in public because now everything is recorded. And, actually, that’s kind of a drag for future documentarians, etc. because the more slick and aware politicians are all the time the less they will let who they really are and what they really believe slip out – and that is actually more dangerous in the long run.

Check out the trailer for Giuliani Time here, or its IMDB page here.