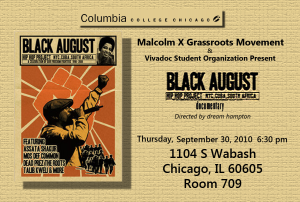 Black August Hip Hop Project (2010) is a documentary directed by writer and filmmaker Dream Hampton (first woman editor of The Source Magazine) in association with Malcolm X Grassroots Movement. The film is intended to raise awareness about political prisoners in the United States and abroad. The documentary features interviews with intellectuals and social activists such as Assata Shakur, Kathleen Cleaver, as well as performances by Hip-Hop artists such as Talib Kweli, Mos Def, David Banner, Dead Pres, and Common. Shot in the span of ten years, Black August Hip-Hop Project takes us to New York City, Cuba, and South Africa.

See link to trailer below: