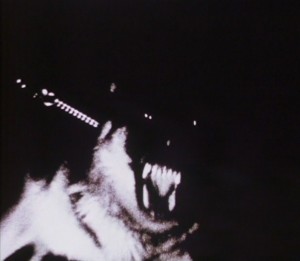 In Order Not to Be Here is the inspired, award-winning vision from Chicago-based experimental filmmaker and artist Deborah Stratman. Rife with creepiness, In Order feels like a bad-dream—or a leaked surveillance video from a lurking shadow government—it’s a dreamy, objectively-haunting, quasi-surveillance video. It’s also a film that poses many questions, one being the inevitable query of categorization: docudrama or experimental narrative?

In Order opens with an aerial, infrared intelligence video of a k9-team, who is in the midst of a hunt; following radio command from a offscreen surveyor, the dog-team slogs through darkness to capture an unknown figure.

A more subdued middle-passage succeeds this gripping opening, shifting focus to an indexing of familiar suburban imagery (e.g. fast-food, fences, street-lights); alas, we confront the bleak reality of our consumer-driven milieu—and, yes, it’s also a reminder that we know the characteristics of a McDonald’s building far too well (!).

A memorable chase scene book-ends this and, again, Stratman experiments with the aerial point of view camera. In fact, Deborah employs a handful of experimental film techniques throughout, including modified usage of the Kuleshov Effect, which proves to be sharply effective in a small number of instances, the most notable being audio from a news report (or quasi-news report) detailing a fire, which plays over this concluding chase, and, in turn, bestowing new meaning upon the image—altering a unknown runner into a fleeing arsonist, adding a sense of suspense and story.

Subversive and soigne, subterraneous and shadowy, In Order Not to Be Here is trenchant proof that Deborah Stratman is a trail-blazer clearing her way to the forefront of contemporary experimental film.

Deborah will screen and discuss her newest work, an 55 minute experimental doc, O’er the Land (2008), on 4/15/09, part of Viva Documentary’s Winter Film Series. Deborah’s doc, The BLVD (’99), examines Chicago’s the subterranean street-racing culture, and will screen at viva doc on 4/7/09).