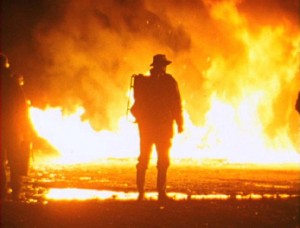 A wise man once said, “Let us all cool our jets. Let us all take the time out of our busy schedules to watch great documentary films. That is when we find our peace.”

For 2009, Viva Doc has put forth extra effort to curate a film schedule built both of the essentials and the obscure. And, to buy you some time, we have tried our best to assemble a schedule with documentaries more on the short side.

We kicked off the festivities this past Tuesday, with a screening of Christo’s Valley Curtain and, we must say, the attendance was phenomenal. We hope you all enjoyed the film.

On April 15th, filmmaker Deborah Stratman, a fellow Chicagoan and film professor at UIC, will make an appearance with her latest experimental documentary, O’er the Land(2008), which recently played at the Sundance 2009 film festival, and is also scheduled to play at the True/False film fest. We’ll also be playing Deborah’s documentary, The BLVD (1999), a documentary about Chicago’s elusive car racing gangs and street dudes. Do not miss this event, or else you will find yourself having reoccurring nightmares that, at the very least, will fill you with endless regret and a longing for time travel.

NO SCREENING DURING SPRING-BREAK