It happens all the time. A film gets great reviews, but once you’ve seen it you can’t help but wonder “Wait, what was the big deal again?!” Sometimes documentaries are so bad we can’t even bear to finish watching them. Here are four of these, according to Viva Doc staff members: 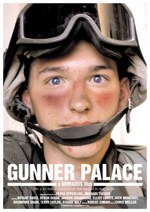 Mario: Gunner Palace (2006). There was a lot of talk around Gunner Palace when it came out on DVD. People called it one of the only docs that shows the perspective of soldiers in Operation Iraqi Freedom. What drew me to the film was they young man on the cover. His freckled face being framed by an over-sized helmet really made me want to see what this film was about. The beginning of the film brought me into the mind set of the young soldiers and it struck me that they seemed to act like they’re on spring break during the day and soldiers by night. That’s the only thing that really stuck with me. I’m sure the film had a lot more to offer if I’d had the will power to finish it out. I don’t know what made me turn the film off but I will say this. The Netfilx envelope stayed with me for a few weeks. I finally returned it and found myself checking it out from the local library. The cover got me again. That time the DVD was returned four days late in it marks the most money I’ve paid to not see a movie. I liked the soldiers rapping and it’s an engaging subject but I just couldn’t finish this film. 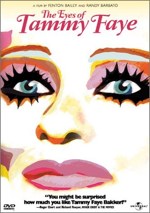 Margaret: When I first met eyes with this documentary on Netflix, I just knew it would be love at first sight. Fenton Bailey and Randy Barbato’s “The Eyes of Tammy Faye” (2000) seemed right up my alley. Finally, the secrets of Tammy Faye Bakker (such as why in gosh darn heck did she ever marry that loony, Jim, in the first place?) would be out in the open. And why did she wear all of that mascara? I settled down for one crazy ride and was thoroughly disappointed. OK, I never thought I would say this, but the doc was just way too campy. The title of each “chapter” of this convoluted story was announced by puppets. Sock puppets for goodness sakes. Yes, RuPaul was fabulous as the narrator, but the documentarians failed to ask ANY hard hitting questions. If it weren’t constantly asking myself:”How does she get all that makeup on her face?,” I would have turned the doc off after the first ten minutes. 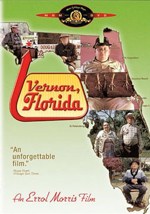 Arlen: Vernon, Florida (1982). Before legendary doc-maker Errol Morris ever invented the Interrotron interviewing device or popularized the historical re-enactment in his groundbreaking film The Thin Blue Line, he did a film called Vernon, Florida. And although it’s been called “quite unforgettable” by Newsweek, I just couldn’t finish watching it. Morris set off to make a film about how many of the town’s residents voluntarily amputate their limbs to collect insurance money but he reportedly received death threats while doing research and had to scuttle the project. So instead, he made this bizarre little 56 minute compilation of unrelated interviews that turned out to be pretty unwatchable in my opinion. The thought that kept running through my head as I tried to stay focused on the movie was “How could the same person who made Fog of War make this dreadfully-boring interview collage?” 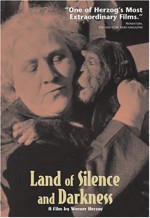 Karl: A documentary I couldn’t watch, sadly, was Land of Silence and Darkness by Werner Herzog. It is a really shocking sight seeing these people who are both blind and deaf. I was amazed by their descriptions of what it was like to be so. There is no darkness and certainly no silence for them. The problem with the documentary was the visual element I didn’t find it interesting watching these people sitting in different locations talking through a translator to the camera. There was hardly anything interesting that was cut away to as well. A powerful and interesting idea but lacking in the main appeal of watching a film… The visuals.