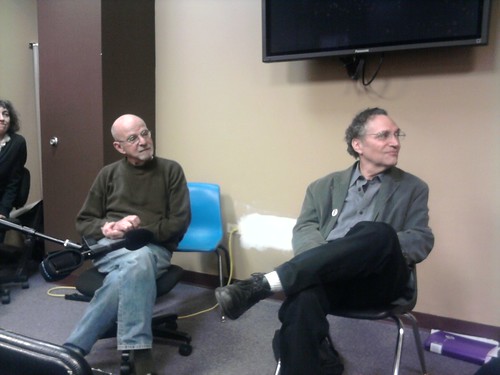 Just over a week ago, Gordon Quinn and Jerry Temaner came to Columbia College to participate in the “Art, Access & Action” Summit at Columbia and talk with documentary students (and others) about documentary filmmaking and how filmmaking and society has changed since the era when great early Kartemquin films like What the Fuck are These Red Squares? and Hum 255 were made.

The discussion featured a screening of What the Fuck are These Red Squares?.

Here's a synopsis of the film:

Striking students meet at a “Revolutionary Seminar” at the Art Institute of Chicago in response to the invasion of Cambodia and the killing of protesting students at Kent and Jackson State Universities. They explore their role as artists in a capitalist society and issue questions like: What are the implications of the artist's elitist position in America? Is it possible not to be co-opted, as “radical” as one's art may be? What are the connections between money and art in America? between the “New York Scene” and the rest of the country?

The conversation was filmed and video of the conversation may be posted on the Viva Documentary website in the near future. For those of you who missed it, the discussion got into how discourse has changed since the 1960s, why students protested during Vietnam and why there aren't many students protesting the wars in the Middle East right now, whether spontaneous conversation like this could be filmed for a documentary in today's world, and whether young people are turned on to the most pressing social and cultural issues of the day.

The conversation was very free-form with Gordon Quinn and Jerry Temaner offering many anecdotes from their experiences as filmmakers throughout the past decades. Both shared memories of the Democratic National Convention in Chicago in 1968 and the fascinating sight of young people at pay phones letting their parents know that they were alright and their parents shouldn't be worried about them (this as shots of police beating young protesters were being shown on television).

Following the early Kartemquin films discussion, Gordon Quinn participated in a talk about fair use, copyright and the commons with accomplished PBS filmmaker Brad Lichtenstein.

The two used the document, “Best Practices in Fair Use”, to go through examples from their experiences as documentary filmmakers. Each example touched on an element of the “Fair Use” document, which is a document for filmmakers which empowers them against those who might suggest they don't have the right to use certain material in their work. “Fair use” allows a filmmaker to “quote copyrighted material without asking permission or paying for it” (in some circumstances). It’s what keeps copyright law from being total censorship.

That conversation was filmed, too. And it will be made available to the public sometime in the not-so-distant future as well.

Along with the upcoming International Student Documentary Competition Fundraiser, World Shorts, there are plans in the works.