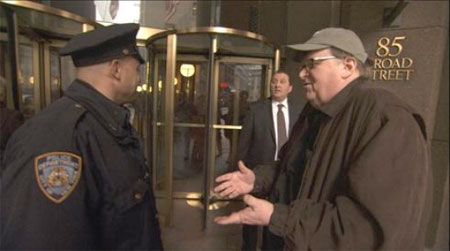 How fitting is it that during a week of premieres for Michael Moore’s new film, Capitalism: A Love Story, the “group of twenty” nations (G20), which together account for about 85 percent of the world’s economy, were in Pittsburgh to revitalize global free market policies and even renew the people of the world’s faith in capitalism?

Just as Michael Moore was about to begin his premiere in Chicago, in Pittsburgh thousands of students (effectively or ineffectively) were acting upon what they think and feel about capitalism and were being criminalized and suppressed by a security presence that was effectively imposing martial law on the city of Pittsburgh so that the G20 summit could happen without a din going on in the background.

At the premiere in Chicago, about 50-100 people from the general public were allowed in to the premiere. Another couple hundred seats were for press, local politicians, union workers, and workers from the Republic Windows factory, which had staged a sit-in in December 2008 when the workers found out the factory they worked in would be shut down and they would not be getting owed vacation and severance pay.

The screening was an event. Moore came before the audience to introduce the film saying he was honored to be here. He would be going on Bill Maher’s show, and afterward, a Q&A would take place.

In two hours, Moore along with his great crew and archival team weaved a tableau that connected a series of events and personal stories which had occurred in the past few years.

A montage of bank robberies with Iggy Pop singing a rendition of “Louie, Louie” opens the movie. A masterfully edited sequence comparing America and the history of Rome before its empire fell takes place followed. Then, Americans are seen being “robbed” by banks or having their homes foreclosed on.

Moore's new favorite fact to tell news pundits is heard: A foreclosure happens once every 7.5 seconds. Rep. Marcy Kaptur is featured in the film advocating for open rebellion as she says from the House floor to Americans, “don’t leave your home” unless the bank foreclosing on you can physically produce your mortgage.

A harrowing portion of the film provides Americans a glimpse into the dark side of capitalism through “dead peasant policies,” a practice that involves businesses or corporations taking out life insurance policies on people who they think will die and make them money. The practice symbolizes all that it is evil about capitalism.

Moore said of “dead peasant policies” during the Q&A that this is “how corporations see you.” They think it is in their best interest to not give you health insurance and rig the system through unsafe conditions in the workplace. Then, you will die sooner and will make them money.

A horrific story involving young people is included in the film. Moore details how two Pennsylvania judges were charged with taking millions of dollars in kickbacks to send teenagers to two privately run youth detention centers. He chooses to go beyond calling this corruption and calls it a symptom of capitalism, a result of a system that legitimizes greed.

In the latter part of the movie, Congress is shown doing the bidding of Sec. of Treasury Henry Paulson. The majority of Congress members are afraid of voting “no”, of being responsible for an economic meltdown that could cost them their re-election. Like in October 2002 when they were afraid to vote against the Iraq war for fear of being labeled a supporter of Saddam, they allow what Rep. Marcy Kaptur agrees is a “financial coup d’état.”

Archival footage of Franklin Delano Roosevelt that Moore explained was “conveniently lost and buried” appears toward the end of the film. As he was dying, FDR asked that someone film him speaking about a Second Bill of Rights.

For Moore and crew working on the film, it was intensely emotional every time they watched the footage because it made one wonder what the last 65 years would have been like if Americans had seen this. And, the archival team uncovered the footage by refusing to believe the Roosevelt Library when the library told them the footage didn’t exist.

The film is an intensely personal one for Moore. Going back to the production of Roger & Me (1989), Moore goes into the trials and horrors that his hometown Flint, Michigan experienced and how Flint has been for the past twenty years. Moore tries to get a meeting with the men in charge of running GM so he can offer some advice that could significantly turn business around. He is not allowed to go near the building entrance.

The faith Moore had as a child in Judeo-Christian teachings and interviews with priests add an extra element of intensity. News clips show how Americans have been duped into having faith in capitalism, faith that directly contradicts what many believe religiously.

Moore’s magnum opus comes to an end with a sequence of Obama riling up citizens for “hope and change.” Shots of individuals taking on the recession, shots of people refusing to let capitalism take away basic needs that are necessary for survival, and shots of workers championing democracy in the workplace end the film on a high note.

The idea of democracy in the workplace was emboldened by the presence of the Republic Windows workers whose story was featured in the film. Moore and his crew were the only media allowed in to the factory during the sit-in. It is evident that the workers trusted Moore as an ally who would give voice to their values and a few of the workers choose to thank him personally during the Q&A.

The audience participating in the Q&A showed signs of increasing skepticism for Obama. Chicago might be “Obamaland,” but the engaged working class of Chicago knew even more clearly after seeing Moore’s film that Obama has been conducting policy for the richest 1% at the expense of the poor, working, and middle classes of America.

Moore indicated that he found the appointment of Timothy Geithner to Secretary of Treasury and the naming of Larry Summers as an adviser to be very unsettling. Instead of being properly critical of Obama, he chose to apply twisted logic to the situation and argue that big banks hire bank robbers to help them prevent banks from being robbed and so, perhaps, Obama hired Geithner, Summers, and others closely linked to the banking industry so they could tell him how to prevent Americans from being robbed again.

It doesn’t quite make sense how willing Moore is to contend that we should continue to hope Obama does something that would sharply contrast his history as a senator, presidential candidate, and as a president so far. What does make sense, however, is how Moore explains that Obama has been out there alone with little support from the Left in America.

Moore tells the audience there is no crying in politics. Americans have to get busy themselves and cannot leave this up to a Michael Moore or Barack Obama. He asks the audience to organize around the movie and bring groups and unions to the film that will open in more than 1,000 theaters.

Capitalism: A Love Story has the potential to tap into the anger boiling beneath the surface, anger that has manifested itself on the right but has unfortunately been stifled and stymied by progressives, liberals, activist organizations, and even unions.

A film student stood up during the Q&A to ask what advice he would give film students. Moore told film students in the audience “beg, borrow, and steal” and “shoot, shoot, shoot.” He says “make films from your heart.”

He added, “Don't make what you think will look good. Make something you would like to go see on a Friday night.”

Finally, he told film students, “Think about the 1 million who want to see your movie, not the other 299 million in America” that won't. Focus on mobilizing that audience to see your film and you'll be successful.