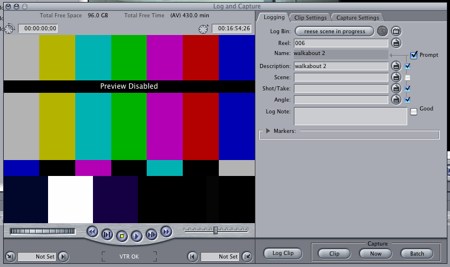 (Written while waiting for several MiniDV tapes to be captured)

Sometimes, for a simple offline edit, I just want to capture a full tape. Why isn’t Final Cut smart enough to just capture the full tape in, say, ten minute chunks, finishing with a shortend if the full tape wasn’t used?

This is pretty self explanatory, but seriously, why can’t you do this? And in a similar vein, wouldn’t it be cool if you could:

4. Ability to keep the good portion of an aborted capture attempt

5. Capture off a tape for X minutes, timecode breaks be damned!

A user should be able to tell FCP to capture the next X number of minutes of a tape, without aborting due to a timecode break without having to resort to using Capture Now.

6. Ability to toggle preview sound on and off midway through capture